Putting the windows in.

I havn't written in such a long time as I have been having problems with my computers hard drive and couldn't get my photos off my camera. I still havn't sorted the problem out propperly but I'm using a different computer for now.
So. I have put in all the windows. What a mission. First I had to hot glue all the frames to the outside wall of the window holes. That took ages, and of course when I painted them the paint sunk under the peices and covered up half of the writing I had put on the back of all the peices telling me what they were. So there was a bit of guess work involved, and a bit of frustraited removal of glued on peices, to go through, before I completed this step! 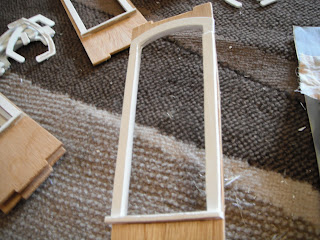 Here is one of the windows with the outer frame on. The frame is made up of 4 peices. The top curved part, the two sides and then the sill. When I had got the framing on I then had to go around all the edges and fill them as some of them were quite holey and they looked a bit rough. The next step was to glue the perspex window glass to the inside of the windows with PVA glue. 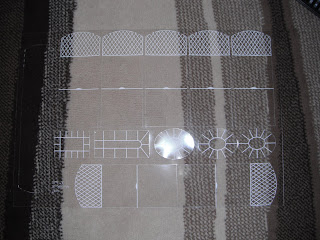 Here is what they look like before they go in.
At this point in the proceedinging I realised that 2 of the attic window panes were not in the pack. I emailed Greenleaf who make the kit and they said they would send me the missing peices. I sent my adress and waited for several weeks but nothing came in the post. Then I emailed them again and found out that their server had crashed (poor people!) and my email had been lost as it came though at that time. After that though they sent them straight away and I was excited to glue them in the other day. After the glass was in I had to glue the frames onto the inside of the walls over the glass. I had to do this with PVA aswell to prevent the hot glue melting the window glass. There were all these walls with heavy books covering all the windows (to hold the framing in place) all over my lounge! 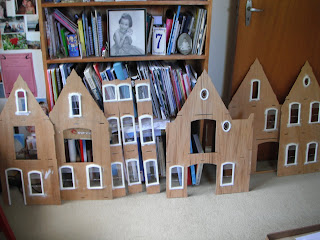 Here are the walls with the windows in - I should do a close up shot so you can see the detail on them better.
While I was waiting for the windows to come I had a try at making a little blanket chest that I bought off http://www.minis4u.co.nz/ a bit shabby. I have been so inspired by reading other doll house bloggers blogs. Particularily Carolyn. You can have a peek at her blog here http://carolynslittlekitchen.blogspot.com/ It's fantastic! Anyway here is how I did it. 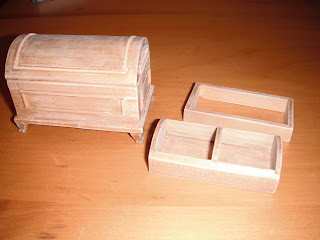 First I sanded it down. 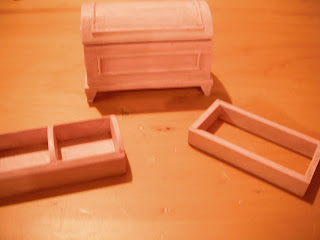 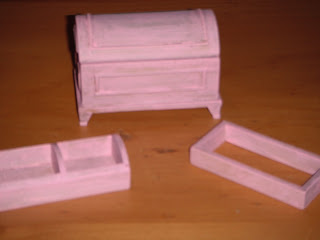 Next I painted it light pink. 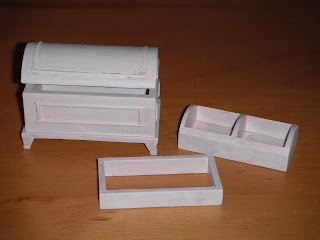 Then I painted it a really pale light pink. 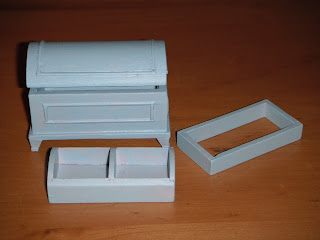 Next I painted it an egg-shell blue.
And then I sanded it down a bit to expose some of the under-layers of paint and make it look worn. This is how it turned out. 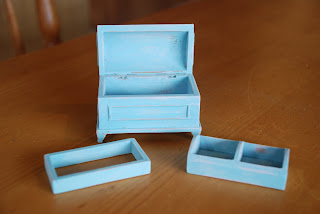 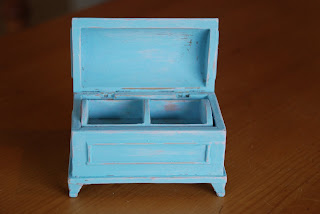 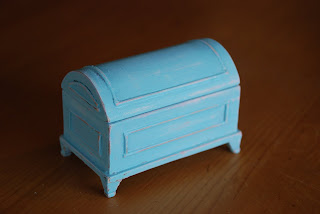 The last three photos are better because I took them on my SLR.
I also painted the stairs white. It was a quite a mission getting into all those little corners. But the result looks good. Then I tryed my hand at making some miniature roses out of polymer clay and also some cute little bottles out of pretty beads. 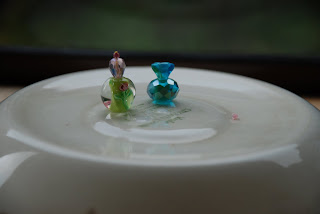 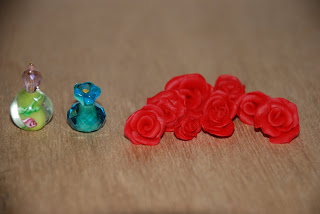 The flowers are not done to scale. I was just practicing the technique of making them. 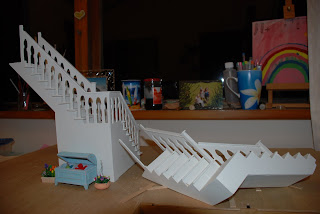 Here are the stairs. The little flower pots next to the chest, I bought off trademe. 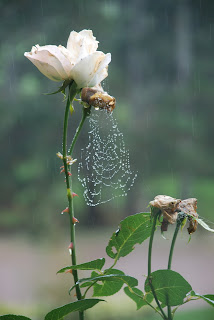 And here's a pretty picture I took from out my dining room window the other day to finish off with!
Next I will be figuring out what to do with wall paper and lighting.
Love Amy.