The Start of a Mini Cottage and some Chrysnbon Kits

Recently (well maybe it was a few months ago...) I started making a mini cottage. I was missing my dollhouse, which is in New Zealand, while I am in Fiji. So I thought I should make another one. I hadn't done so yet, mainly because of the lack of tools I have up here, and also the difficulty of getting materials.
I think sometimes I don't start things I have ideas for because I'm worried they won't work out perfectly. When I began to think about that, I decided to just get on with it, and start with what I had. Which were some sheets of cardboard I'd bought in Suva (the capital city of Fiji) and also some foam-core board. It had been quite difficult to find them—I'd traipsed from stationery shop to stationary shop looking for cardboard, and nowhere seemed to have it! I went back to the shop I finally found some in when I was in Suva last Saturday to get some more (not being able to find any in Nadi where I live, which is a little over 3 hours away) but they were closed! Darn.
Anyway, here is what I've done so far...


The Chrysnbon kits that I bought off eBay in Canada (and which took four months to arrive—but were probably in Fiji for at least three of those) were a bulk lot. I bought them for the chairs, but included was a kit for a door. I made this up to be the door of the cottage, and painted it in my favourite colour of the moment.
I decided to make it quite small, so that it can be taken as carry on luggage. Each wall is the size of an A4 pice of paper laying on it's side. I plan to make it two stories.

This is the front wall. The big hole is going to be a bay window (because how cute are they!?) 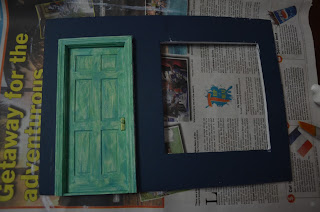 I painted the inside wall white, then I had to paint the outside one too, because the foam core board started to warp and get a bend in it. 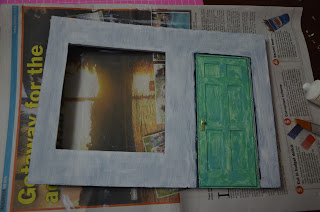 For the floor, I stuck together two sheets of cardboard with white glue. That made them about 5mm thick. I painted it black so that any gaps in the floorboards would look more realistic. Then I cut some floorboards out of popsicle sticks. I didn't stick them down yet though. I wanted to connect the walls first. 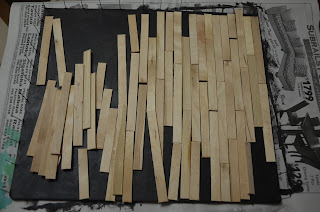 This is one of the side walls. I made the window this size so that a set of shutters I have will be the right size to cover it if they were closed. 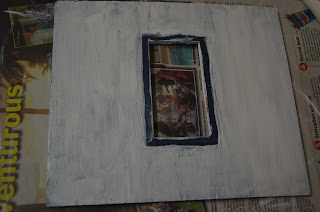 To connect the walls, I punched dress makers pins through the floor, then put white glue round the edges of the floor and slid the walls onto the pins. Some of the pins had to be adjusted. When I was pushing the pins through I had some black paint on my hands and I accidentally pushed a pin into my finger. It has healed now but I have a black dot in my finger! 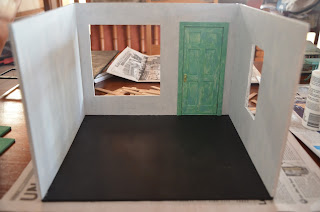 Then I did some more paint layers inside and out, then started fitting in the floorboards. 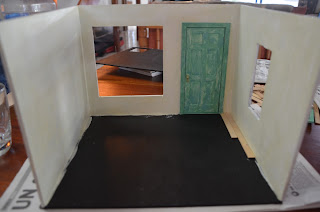 I have done some more on the cottage, but I'll have to show you guys that on the next post, because I haven't been able to get the photos off my memory stick for some reason.
I'm pretty happy with it so far though!

This is the little bookshelf I made a while ago. It turned out a bit rugged, but I like it. I made all the little books to go inside.
There are still more to make. It took ages to glue all the pages together and to make the covers. But I got faster as I learnt how to do it. I'd never made books before. 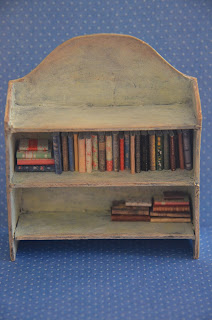 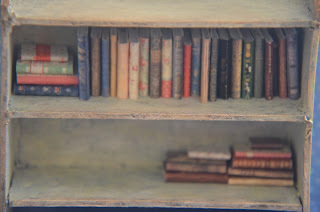 So now onto the Chrysnbon kits.

This is the first chair. I wanted to do pastel colours so I made this a sunny yellow. 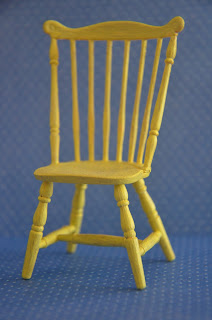 I had two kits for these blue chairs, so I made a matching set. I didn't like the black fabric that came with the kits, so I used a bit of this material that used to belong to my Mum. She did lots of quilting, and this was from her quilting supplies. It's cream with tiny light blue hearts on it.
The little side table was from another kit, but I painted it cream to match the chairs. 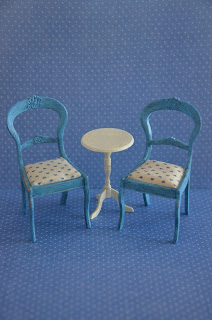 Next was this chair. I decided to make it purple and paint it with tiny flowers.
I used super glue to stick all these kits together, but I want to get some proper plastic model cement. Hopefully that will be easier to use. 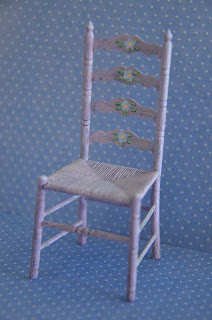 This little table came with a bunch of other accessories. I painted it to look a bit worn. 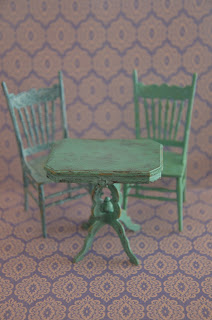 Then I made up this chair. I think this is my favourite kind. I like the details on it. 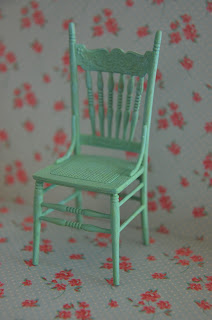 As you can see, it's the same as the other one I made last year. 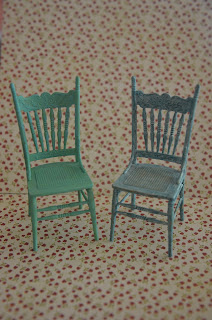 Then there is an arrow backed rocking chair with a little stool. I painted tiny pansies on them. 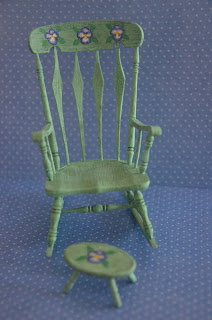 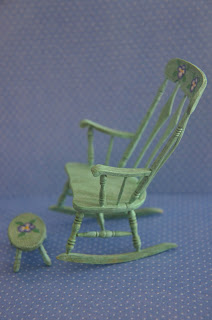 And these are the other bits that are left over. I haven't decorated them yet. But I will get round to them eventually. I'm not sure what to do for the lanterns. I'll have to look on the internet for some inspiration for them I think. 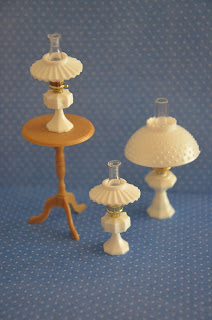 I hope you're having a lovely day!
Love Amy.